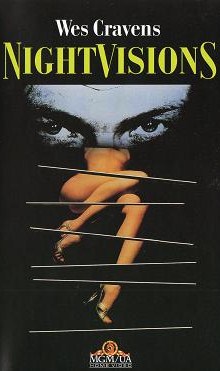 [Loba Apology: I nearly left this movie out of my Cravenous reviews. I honestly don’t know what happened. I guess I got so excited about getting closer to The People Under the Stairs that I lost my focus. Oversight rectified. You’re welcome.]

Sorry for the miniature nature of the poster art for this film, but this was all I could find. With as misogynistic as the imagery is on the artwork, though, I’m kind of okay with this being the largest version I could find. Also, that’s pretty risque for a made-for-television film, eh?

That’s right, after the three-in-a-row lackluster performance of Wes Craven’s theatrical offerings, he decided to head back to television. Maybe he thought he could find his mojo there. Maybe he enjoyed working on those Twilight Zone episodes so much that he wanted to recapture some of that. Or maybe he just wanted a break from being bullied and berated by critics, producers, and fans. He wanted something easy. A palate cleanser, so to speak.

Whatever the reason, we ended up with 1990’s MFTV movie Night Visions. I almost didn’t end up reviewing this film, as it’s unavailable for rent anywhere I looked. However, as luck would have it, someone has posted it to YouTube. Oh the lengths I’m willing to go for a review series.

The bonus we get with this film is that not only did Craven direct and produce it, he also co-wrote it with Thomas Baum. Baum, by the way, was quite prevalent as a screenplay writer back in the day, writing The Manhattan Project, several episodes of Deadly Nightmares (originally called The Hitchhiker), and Nightmare Cafe for Craven. My OMG moment from his credits is that he wrote the screenplay for The Haunting of Sarah Hardy, which is one of my favorite Sela Ward movies and also can be found in its entirety, much to my girlish delight, on YouTube. Prophets bless YouTube.

But I digress. What else is new, right?

The most telling thing about this movie is that you instantly know two things: Who the killer is and what the purpose of the movie is. The former was painfully obvious to me and led me to believe that it was secondary to and in support of the primary purpose: This was meant to be an introduction to a television series. Given that Craven would try again in a couple of years to launch a different series with Nightmare Cafe, I think it’s safe to assume that he really was growing weary of making movies. He wanted to do something different. Maybe just produce for a little while, with the option of writing and/or directing if he chose to.

Unfortunately, this was not going to be the E-ticket that he wanted it to be. There were simply too many questions unanswered and not enough fresh intrigue about either of the main characters for this to incite the interest needed to convey it from MFTV movie to series. Even Craven’s directing was on-point but mostly predictable with this film. It just felt like a paint-by-numbers effort on his part and another indication that this was definitely a point in his career when he was struggling with what he wanted next.

That being said, this was still better than Chiller. I’m telling you, Chiller is going to end up being my least favorite of all his films, denizens. I can feel it.

Seriously, Night Visions was a good enough effort from everyone involved that I didn’t mind watching this film. I wouldn’t seek it out again, but I’m not going to slam people for the attempt. Especially James Remar, who seemed to be giving his all to what was unfortunately a predictable cop character. Loryn Locklin did her best, but her character was the less interesting of the two (which was strange since hers was the more damaged and more complex of the two leads; Craven again was showing his interest both in strong female characters and in the complex dynamics of mental turmoil). Also, it was great seeing Penny Johnson in another Craven film (remember, we haven’t seen her since her stint as Sue in The Hills Have Eyes Part 2) as well as Mitch Pileggi, working on perfecting his hard-ass law enforcement official in charge of two rogue agents. Gee, wonder when that kind of expertise would ever work in his favor…