Want to hear how I temporarily closed down I-95 South and gave Sammy an early Christmas mud bath? 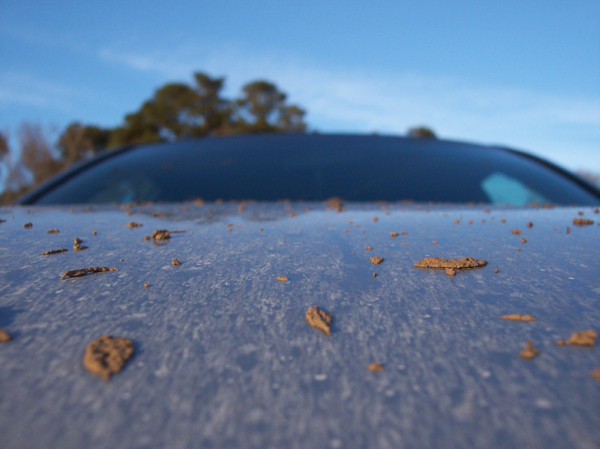 So today was a good day to travel, I thought. It’s the day before Christmas Eve, which I know is typically the popular travel day for people who travel for Christmas…which, thankfully, are far fewer people than those who travel on Turkey Day. I knew, however, that I should expect some rough riding at least until I was beyond the tenacious and ample mounds of snow that snaked up the I-95 corridor.

Truth. I sat for about 2 hours just trying to get onto I-95, then ended up in sluggish, sometimes stop-n-go traffic from the 495 merge until around about Kings Dominion. For those not in the know, that’s a hella long time. Thank goodness once again for my iPod and awesome podcasts.

Once I hit North Carolina, however, things were smooth as silk. The snow was gone, the temperature was wonderfully warm, and the sun was shining brightly and strongly down on Sammy’s sleek silver and salty frame. I cruised along at the lovely standard speed of 70 MPH (another reason to love NC!), listening to P!nk dissect her marriage and Suzie Plakson explain how she Didnwannadoit. Traffic had broken up and spread out, and I finally found myself all alone on my own personal stretch of the road.

This is probably the most serendipitous moment of my entire journey.

I noticed that a car was getting ready to merge onto the interstate, so I switched from the right lane to the left lane so that they would have a clean shot at the merge. Next thing I know, the driver is rocketing straight from the merge lane into my lane. While I’m right there.

Three things happened simultaneously at this point: I honked, slammed on my brakes, and swerved toward the left to avoid being side-swiped by the driver.

Know what’s kind of cool about I-95? Both north- and southbound lanes have these grooves on each shoulder that, when you run over them, they rattle your car just enough to shake you awake. Apparently, enough people were falling asleep at the wheel that TPTB decided this would be a good way to shock sleepy drivers back awake.

Sammy’s front left wheel hit these grooves as I braked and swerved, which startled me enough that I swerved back toward the right in what I have deduced in retrospect was a rather overcompensating manner, which started Sammy wagging his little tail like an over-zealous puppy. Cute on puppies. Not cute on cars.

The fish-tail motion started to increase and next thing I know I’m spinning. And angry. Not scared. Not panicky. ANGRY. Angry at the stupid driver whose ignorance has left me feeling like I’m trapped in the spin cycle of an industrial washer. Angry enough that I was saying things about said driver that I think would have made my Navy veteran grandparents blush.

Thankfully, my anger kept me focused enough that I did what I knew I needed to do: took my foot off the accelerator, turned into the spin rather than fight it, and started to carefully slow down until I could regain control. A couple of spins later and all was still. And Sammy was parked in the saturated sogginess of the ditch running along the side of the interstate. Facing the wrong way. But safe. As was I.

Of course, safe is a wonderful thing. But so is safe and not sinking into mud. Which I was quickly doing. Not even rocking Sammy back and forth was going to get me out of this. So after several increasingly frustrated attempts, I finally cut the engine and climbed out to assess the mess and call AAA. That’s when the awesome gentleman in the AT&T service truck traveling northbound pulled over and asked me if he could help.

I may not have always depended on the kindness of strangers, but this guy and the winch on the front of his truck were my heroes, fo’ shizzle. He told me to hang on while he went up and turned around so that he could come over onto the southbound side.

That’s about the point when I became the center of some very unexpected attention. While waiting for the service truck to return, I glanced back at the northbound side and realized that two state trooper cruisers with their lights flashing were pulling over across from Sammy. I also noticed that another car had pulled over further up the northbound side, and a Black woman was quickly running over toward me.

I only mention her race because this woman was about as pale as I’ve ever seen a Black person turn. Seriously, she was nearly as White as me…and that’s saying a lot. It wasn’t until she kept repeating “I’m so sorry…are you all right…I’m so sorry” that I realized this was the driver who nearly hit me in the first place. She had turned around at the first exit she found and came back, apparently calling the police as she did so.

I assured both her and the two state troopers that I was fine, just stuck in the mud and waiting for the nice AT&T guy to hook his winch up to Sammy’s bum and yank him free.

[Before any of you ask, of course I didn’t refer to Sammy by his name or his gender. I didn’t really need the added indignity of having the cops giving me a breathalyzer test…]

That’s when the county cruiser, the ambulance, and the two firetrucks arrived, blocking all lanes of traffic as they positioned themselves around my part of the interstate that was becoming increasingly crowded.

And that’s when I wanted to crawl under Sammy and hide.

This was also the point when I realized that, although I was semi-oblivious to the danger at the time inside my anger warp bubble, people around me witnessed something that they translated as “That’s definitely going to have a bad ending.” This woman who called the police must have told them to expect the worst possible scenario. What she saw in her rearview mirror as she drove away obviously left her shaken and afraid…and left me very grateful that I didn’t see what she and others saw.

I spent the next 10 minutes assuring her and all the officers and rescue people that I was fine, that Sammy was fine, and that all I really needed was the nice young man in the AT&T truck to do what he was waiting patiently to do. They quickly dispersed, probably equal parts happy to see that their expertise was not needed and possibly glad to have a little innocent excitement in the middle of their shift.

The AT&T guy and the county cop hooked up my car and pulled me out and helped me do a walk-around to make sure that Sammy was still really in one piece. I thanked them both profusely. I’ve also just finished e-mailing AT&T and letting them know that they hire some damned fine people down here in the Tarheel State. And then I was on my way.

Of course, anyone driving past that part of I-95 after the fact probably stared at the loop-de-loop streaks of rubber along the roadway and the big streaks through the muddy ditch on the side of the road and wondered what the frig happened there. Let me assure you, it was just Sammy leaving his signature across the interstate. Honestly, he’s turned into such a diva.

Seriously, though, thank you to whatever patron saint or universal glitch that’s out there, watching over white wolves and their anthropomorphized cars. Thank you to the stunningly fast response of the EMTs, firefighters, and police officers who, thankfully, were not necessary. Even thank you to the woman who started all of this mess. Thank you for coming back, for apologizing, and for caring, in stark contradiction to the opinion I had of you as I was spinning right round, baby.

And to the drivers who were caught up in all the excitement…believe me, I’m sorry. I know what I would have been saying if I’d been caught in the backup, no matter how short it may have been. So, sorry about that delay. I hope you all got to where you were heading without any further delays. I promise I will do my best to refrain from causing any further interstate altercations on my way home.

As for Sammy? He is almost perfect. Seems that his recent alignment is a little off-kilter now, but other than that, he’s just very dirty. So it’s a power wash for him in the morning, followed by a fresh tank of gas for lunch. As for me? I think I’m going to enjoy the next few days traveling no faster than my two legs can carry me. I’m quite through with my attempts at impersonating a dreidel, thank you very much.