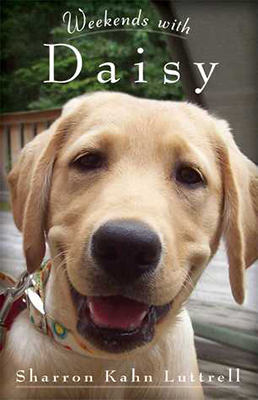 Speaking of books that suckered me into reading them because of their cover art, that’s precisely what happened when I saw this painfully adorable puppy dog punim staring out at me from the cover of Sharron Kahn Luttrell’s book Weekends with Daisy.

And so it went with Daisy. I couldn’t resist her cute doggy smile or wanting to know the story behind it. What makes her more special than any other adorable pooch? She’s a service dog. Luttrell’s book is all about Daisy’s training through a program in which inmates do the bulk of the command training, and “outside” volunteers take the dogs for the weekend, to work on acclimating them to the sensory overload of life outside prison walls.

As cute as Daisy is and as laudable as this program is, I have to admit that I considered quitting this book after only a few chapters, simply because I found Luttrell too…judgy. Even before she learned why Keith, the inmate responsible for Daisy’s weekday training and care, was incarcerated, she makes several disparaging comments about him and inmates in general, which all came across as obnoxious and elitist. No, not all who are incarcerated are redeemable. However, not all who are incarcerated are the unintelligent, vulgar cretins Luttrell apparently assumed them to be. We are all fallible, all capable of making mistakes, all capable of stepping too far over that line of scrimmage and into the penal fray.

I will allow that Luttrell does seem to change her tone as the book proceeds and she begins to see Keith as more than his incarceration or more than his crime (without forgetting why he is in prison or the harm he caused). Really, this book is more a testament to Keith’s ongoing redemption. I would have been far more interested in reading more about his story rather than the banal Lifetime Move Network life of Luttrell and her family.

Still, it’s an interesting “beach read” kind of story that, indeed, has a happy, feel-good ending.

Final Verdict: Daisy is very cute and I’m thrilled that she is now helping someone as she was trained to do, but I think I’ll pass on adding this to my library.