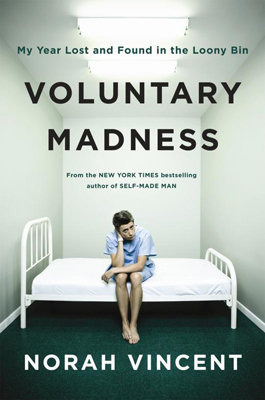 A few years ago, I discovered journalist and author Norah Vincent through her book Self-Made Man: One Woman’s Year Disguised as a Man The title of the book kind of gives away the plot: Vincent spent a year (18 months, actually), living as a man, doing manly things, hanging out with manly men. And monks. Manly monks. It was a level of undercover or “immersive” journalism reminiscent of White journalist John Howard Griffin’s Black Like Me, which documented his 6-week experiment disguising himself as a Black man in the still racially segregated Southern states of Louisiana, Mississippi, Alabama, and Georgia.

Griffin actually went through a procedure, under medical supervision, to artificially darken his skin for his experiment. Vincent’s dedication was a bit less risky, but she truly did immerse herself in her mission. The resultant book was…well, I have mixed feelings about this particular work. I’ve yet to read a review of Self-Made Man that doesn’t at some point reference Black Like Me, and rightfully so. Both books are unique in their earnest attempts to “walk a mile,” one in the skin of another and one in the gender of another.

However, I feel as though Griffin’s decision to go undercover in an attempt to better understand through experience the pervasive racism of his home turf (he hailed from Dallas, Texas) carried with it more weight and justification than Vincent’s ultimate betrayal of trust placed in “him” by people who weren’t doing anything beyond living their lives. I applaud Vincent’s attempts to try to understand the male psyche, but it simply did not carry with it the gravitas of Griffin’s experiment, and in the end, it fell far short of any groundbreaking revelations.

Why mention it at all? Both because I do think it merits reading (I will rarely discourage the reading of any book), and also because, by the end of her time of total immersion as a man, Vincent went through a bit of a mental breakdown. The end result was that she ended up checking herself into a psychiatric ward.

And, thus, another idea for immersion journalism was born.

I felt supremely conflicted about this book the moment I saw it. Whereas Self-Made Man was a book that I felt I could describe as “objectively objectionable” at points, I knew that Voluntary Madness would be a far more subjective reading experience. I grew up with a front-row seat to a severe mental illness and all that such a disease entails. I’ve seen the public hospital mental wards…I’ve even seen the private psychiatric hospitals. I know ultimately what a horribly unfunny joke the mental health industry is in this country.

To learn that Vincent went into these places, cloaked only in partial truth regarding her need for mental health help, caused me to bristle. It’s one thing to play mentally stable people as she did in her first immersive project. To do the same with the mentally ill, even if it was in an attempt to bring to greater scrutiny the questionable treatment they are receiving, felt like a betrayal of something sacrosanct to me.

It was only during her stay at the public hospital that she encountered the most distressingly mentally ill: the schizophrenics, the dissociative disorders, the borderline personalities. And it was only during her time at the “alternative treatment” center that she seemed to find true balance and true mental clarity. It was also in this more exclusive program that she encountered people whose only “mental illness” seemed to be a terminal case of being overindulged brats with daddy complexes who were only there because they were trying to dodge jail time.

Yes, that was a totally subjective judgment. It angered me, however, to read about the incredible treatment afforded to people who barely bothered to stay awake through group sessions while in public hospitals all across this country, such attentive holistic care might actually prove to be the balm so desperately needed by the truly ill. Instead, they’re simply shot up, doped up, weighed down with medications dumped into the mental healthcare arena by pill pushing pimps from the pharmaceutical companies who basically own the public (and some of the private) facilities. And, as Vincent discovered, most of the psychiatrists prescribing these pills say nothing to their patients of the horrifying spiel of side effects that come along with most of these drugs: weight gain, uncontrollable food cravings, diabetes, uncontrollable muscle spasms, kidney damage, liver damage, lethargy…a whole litany of liabilities that more often than not place you on a one-way path to inevitable system failure. But who cares, as long as it gets you out of the hospital. At least until your next committal.

Besides, isn’t it much easier to just load up patients with drugs that suppress all their problems rather than actually spend time and effort working with them? Again, non-objective observation. And, for the record, I do understand that a textbook case of depression such as what Vincent suffers from is nothing like working with someone with schizophrenia. One comes and goes and is relatively manageable. One is permanent, persistent, ultimately drug-resistant, and only guaranteed to worsen with time. I was told once by an acquaintance who worked in the mental health profession that “terminal mental illnesses” were the ones that no doctor wanted to get, because there was no hope for improvement…just maintaining the status quo for as long as possible, until the next inevitable decline.

It shouldn’t be surprising, then, that many mental healthcare providers lose their humanity when they find themselves surrounded by the more distressing mentally ill. For example, the workers Vincent encountered in the public hospital had built up emotional barricades that made them come across as cold and callous. Honestly, I can’t imagine working in a place like a public psychiatric ward without developing a thick emotional armor.

I think that Vincent’s goals with this project were noble in intent. I also think that they brought to light the problems and the positives of the U.S. mental health system. Sadly, there seem to be far more problems, and not many solutions about how to fix them. In light of all the heartbreaking tragedies we’ve seen, even just in this past year, with obviously mentally unstable individuals gunning down innocent people, I think this project should be given extra scrutiny. Vincent has shown us only a sliver of the issues. There needs to be a broader national discourse…something that delves far deeper than branding the mentally ill with derogatory names (you’ll notice that even Vincent’s original book subtitle uses the term “loony bin”; it was changed for the paperback to “Lost and Found in the Mental Healthcare System”) or, even less helpful, branding them “evil.” As if attaching the yolk of this stigma around them dismisses us all from culpability. It’s the same as women jurors branding a rape victim a “whore” as a means of excusing themselves from the truth that such an act of violence could happen to anyone.

Mental illness can happen to anyone. For this reason alone, we should be more understanding and more eager to see more done to understand. But the violence that we have seen all across this country, committed by people who, in the aftermath interviews, were almost always described as “off” or “unstable” or “ill”…we have the ability to help these people or to at least perhaps cut them off at the pass before they reach the point of picking up a weapon and causing such grief and heartbreak.

Final Verdict: One more library book for the “Buy Me Later” pile, if only to have a copy on hand to share with others. I do believe that Vincent’s latest immersive journalistic effort is worth reading on a large scale.