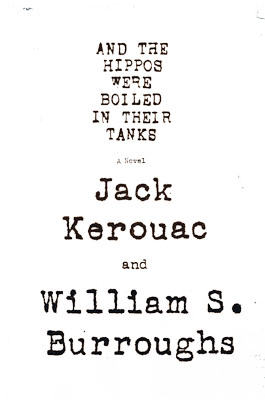 Sometimes, there’s a part of me that feels as though my alma mater failed me in certain indisputable ways regarding my studies. My concentration when I was in college was American literature. However, there are times when I realize that I have severe gaps in my exposure to some of the most important movements to transpire in this particular genre.

One of those glaring gaps is my exposure to the proliferate writings of the “Beat Generation.” In going through my memories of various syllabi from my years in college, I have come to the conclusion that I never had any professor introduce me to the literary likes of Jack Kerouac, William S. Burroughs, Allen Ginsberg…I don’t even remember any offered classes that focused, even briefly, on the likes of these writers. I believe the closest I might have come was one professor who thankfully introduced me to Joan Didion’s Slouching Towards Bethlehem, which included several essays, including the titular piece, on her experiences of being immersed within the 1960s Haight-Ashbury counterculture movement, which was inspired by and in many ways indebted to the bohemian non-conformist attitudes of the Beat Generation.

There was this massive push when I was in college to free students from the strangle-hold of the ubiquitous “White Male” on the literary canon. While I understand this desire to diversify the curriculum in this way, it came at what I deem to be an unacceptable price. Not only are these Beat Generation authors quintessential to the foundation of modern American literature, but Ginsberg’s poem “Howl” and Burroughs’ book Naked Lunch were both the focus of obscenity trials that helped to redefine the parameters of the publishing industry in this country. For these reasons alone, there should be a place at the literary table for the likes of these influential authors.

These are the types of things that I ruminate upon when I find myself in places such as San Francisco. Although the Beat movement began in New York City, in time it shifted to the City by the Bay where, some might argue it gained its greatest momentum and notoriety. It was here that a freshly relocated Ginsberg penned his Beat masterpiece, “Howl,” which was published by the now legendary City Lights Bookstore. I have now been to San Francisco three times. It was only on this recent trip that I finally gave in to my need to step through the doors of this sacred store.

Yes, I called it sacred. Bookstores are to me what churches are to the pious. And City Lights? City Lights is on par with the Vatican. This was the West Coast birthplace of ideas, desires, doubts, questions, intellectual revolution, the ripples of which continue to flow through our collective conscience. For better or for worse, the Beat Generation effectively shifted how we view ourselves and our roles in society…of how we view society in general. They brought under fire the established mindset and questioned the reality of what was deemed acceptable, preferred, right. And City Lights was right there in the center as the publisher of these revolutionary writings.

All this, of course, is build-up for the book that I recently finished. Needless to say, one of the reasons that I had been avoiding City Lights is because I knew I couldn’t go there without purchasing many, many books. I actually put back some of the books that I wanted (a difficult feat, I can assure you). However, I still ended up spending a great deal of time and money there. I left with several writings from Beat scions…not necessarily their most well-known contributions but instead lesser-known offerings that have received less attention throughout the years but still sounded provocative.

Among my purchases was a collaborative effort between Jack Kerouac and William S. Burroughs, the earliest written offering by either author. Written in 1945, And the Hippos Were Boiled in Their Tanks tells a fictional account of a true crime to which both Burroughs and Kerouac were made accessories by prime suspect and mutual friend, Lucien Carr. I won’t go into details since many of them made their way into this novel, and I would hate to give too much away here.

Although, honestly, the details of the crime are almost incidental to what I perceive as one of the cornerstones of the Beat mindset…and that is the ephemeral yet irresistible power of the now. There is an immediacy to how these characters behave that is in stark contrast to established parameters of acceptable behavior, especially that of 1940s-era America. They sleep when they are tired, they eat when they are hungry, they have sex when they are horny, they experiment when they are curious, they drink until their thirsts are quenched, regardless of time or place or responsibility. They respond to the primal rather than the proper. They act in the moment without considering later consequences. They are not shackled by societal pressures of conformity. They view possessions in communal rather than proprietary terms because they place more importance on ideas than on material things. Things are not to be coveted or kept but to be shared and used as needed, by whoever might need them.

There are so many ideas and behavior quirks embedded throughout this novel that came to identify the tenets of the Beat movement—all presented in its nascent years by two who would become linchpin contributors to its birth and growth. However, this novel remained unpublished throughout the lives of both its authors, not seeing the light of published day until 2008—63 years after it was first written.

Is it their best? I can’t say definitively one way or the other, but I can assume that it’s not either writer’s greatest offering. First books rarely are. Is it important? I think so. It is the beginning of Kerouac and Burroughs. Before On the Road. Before Naked Lunch. This was their joint birth, hidden from sight for more than six decades.

As to the strangeness of the title? That seems to be a bit of a hazy sticking point. Burroughs remembered hearing a newscaster state this line while reporting on a fire at the St. Louis Zoo. Kerouac remembered it as being in reference to a fire at a zoo in London. Still another thought is that it was in reference to a fire at a circus. Regardless, let us take a moment of silence for those poor hippos, wherever they might have been.

Final Verdict: You don’t give away a book like this. You give it pride of place with all those other seminal writings from other authors who helped shape and define the literary conscience at its various transformation points.