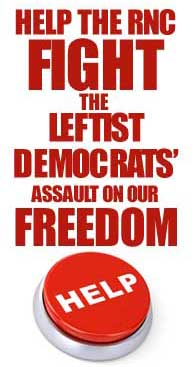 So, dipping into the Angry BloggerTM topic files, I still receive e-mails from the GOP at my junk e-mail account. Said e-mails are still addressed to my father. Said e-mails still both amuse and unnerve me (kind of like the GOP in general). The e-mails are punctuated by catty swipes at all the big Donkey names: Obama, Pelosi, Reid, Frank. They each contain some puerile jab like “Ultraliberal,” “Leftist Radical,” or “Kitten Crusher.” Almost all the messages harp on the national deficit (but strangely fail to mention the name of the president responsible for plunging us into said deficit).

Each message is “signed” by Michael Steele, current RNC chair, former lieutenant governor of Maryland, and eternal douche bag. I love how he is so gung-ho for his party now. Funny how he did everything short of actually switch parties when he ran for the U.S. Senate a few years ago. Funnier how he lost. The messages also always end with a plea for donations to the RNC. Let me get my checkbook now!

To your right you will see a particularly amusing graphic from one of these e-mails. The graphic comes from an e-mail decrying outrage over Arlen Specter’s switch to the Democratic party. It rebukes Specter for:

[peddling] his services—and his vote—to the leftist Obama Democrats who aim to remake America with their leftist plan.

It then goes to compare Specter’s defection to Benedict Arnold’s defection to the British, and compares the GOP to George Washington. Oh, and it asks my father twice for a donation (because outrage costs money!). Actually, it asks for money three times if you count the fact that this graphic also links to the GOP’s secure donation page.

And we wonder why nothing really substantive ever gets done anymore. It’s because hyperbole and fundraising are more important than anything else. And it’s not just the GOP that is guilty of this. My party does it just as much. I’m just picking on the GOP because…well, hell, if you’re going to e-mail me your crappy messages and think that I’m my father, you’re just begging for a blog skewer every now and again. And truth be told, I don’t receive DNC messages anymore. I got tired of reading all about the hyperbole and fundraising. You want money from me? Do something to earn it.