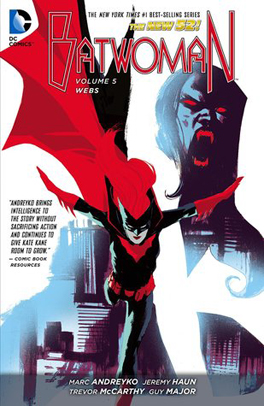 This, sadly, is going to be both my shortest Batwoman review and my last Batwoman review. At least for now. They’ve ended her solo run and, while there is one final graphic novel out there, I have no intention of buying it. I couldn’t care less how Marc Andreyko ended this series. By the time I finished this graphic novel, I was left so apathetic that I couldn’t even muster the energy to be furious that the last two pages pretty much seemed to imply that Batwoman was about to be raped by her new nemesis, Nocturna.

Okay, not completely bereft of fury. Seriously, DC? It’s not okay for Batwoman to marry her girlfriend but it’s okay for her new enemy to mentally Roofie her as she’s trying to fall asleep and trick her into believing she’s someone else so that Batwoman won’t fight her off? Oh, and really subtle artwork in that last panel, of Nocturna, who is apparently a vampire or vampire-like character, penetrating Batwoman with her fangs while Batwoman arches back against her while wearing just a camisole and undies. And with a look on her face as if she were enjoying what was happening to her. Great message there. Absolutely.

What utter bullshit. Sorry, but there’s no tactful way to put it. The whole novel was just example after example of piss-poor writing and some of the most mediocre artwork to ever grace a Batwoman comic. There was nothing satisfying about any of this collection, starting with Andreyko’s terribly anticlimactic ending to the story arc that Williams and Blackman started (and should have been allowed to end, dammit). And then to end the novel on that so-not-kosher, rapey WTAF were you thinking note? Allow me to be thoroughly clear with this sentiment, DC Comics. Fuck. You.

So utterly disappointing. Thanks, DC, for ruining my current favorite character from your comics line. Oh, and it looks like you’ve turned Batgirl into a character I don’t really want to follow anymore either. Thanks. For nothing.

Final Verdict: The only redeemable thing about this collection is the clean copy of that great WWII-era artwork of Batwoman as one of the ball players from the All American Girls Professional Baseball League. I think I’m probably just going to slice that out and then get rid of the rest of the book. Not even going to donate it. Just going to toss it in the recycle bin. That’s how much I hated this collection.