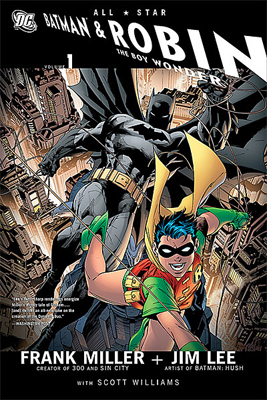 Well, there’s a mouthful of a title, right?

Seems that I went on a bit of a binge the last time I hit the local library, especially when it came to graphic novels. This time, I was surprised to find a couple of selections from Frank Miller’s catalog. I’ve been looking for Miller’s work to show up for a while now; mostly, I’ve been waiting for his Batman work as well as 300. I got part of my wish with this selection.

Even though it wasn’t The Dark Knight Returns, which is what I was hoping would show up, I was more than willing to give All-Star Batman & Robin a go. With this series, we get Miller’s take on how Dick Grayson found himself under the protection and training of Batman after events left them sharing a defining moment involving their respective parents (how’s that for vague?).

Mainly, I was drawn in (ha) by the fact that Jim Lee was the artist for this collection. Lee was an integral force behind the artwork of the X-Men back in the late 80s and 90s. He pretty much helped establish the appearance of that merry band of mutants to which I was first introduced through the Saturday morning cartoon that I still love. Not only that, he helped Chris Claremont create the character of Gambit, who was always one of my favorites on the cartoon. Also? Anyone who gets a vote of confidence from Chris Claremont definitely gets my vote, too.

Obviously, at some point Lee shifted his talents from Marvel to DC, which led to his teaming up with Miller on this retelling of the Boy Wonder’s arrival in the Bat Cave.

Taken in its entirety, this is an amazing collection. Miller’s dark sensibilities work well in conjunction with the world of the Dark Knight. This is not the glowing realm of Metropolis, protected by their alien immortal in bright patriotic splashes of blue and red. This is seedy, gray Gotham, full of characters composed of gritty complexity. There are rarely clear delineations between good and evil, as intent and integrity blur into the deep shadows that Lee so eloquently elicits through his artwork. Kudos should also be given to Scott Williams and Alex Sinclair, who were responsible for inking and coloring, respectively.

Where the weakness of this collection shows is where the weakness of most comics appear: the depiction of female characters. Miller’s women are vapid, vituperative, and vindictive, not to mention extremely objectified through language and artistic renderings. We meet Vicki Vale in her very skimpy lingerie. Later, we see her preening in anticipation of getting close to Bruce Wayne and his huge bank account. The Black Canary is a busty, bawdy barmaid with indecent curves and impossible heels. Wonder Woman…she was the greatest disappointment of all. Apparently, in Miller’s Gotham, a woman of strength and independence by default must be an angry, violent man hater secretly harboring crippling lustful urges toward the primary target of her man-hating ways.

Miller’s depiction of all the women in this collection was infuriating, but no take was more insulting or offensive than his on the Amazon goddess.

Plus, there’s the added insult of the comic-standard ass angle in which we see nothing but the…butt of whatever woman happens to be in frame at the present moment. What a dull, tedious angle, lacking in any artistic integrity or imagination.

That being said, I did find certain other choices by Miller to be intriguing. I liked that his Batman was just the least bit, shall we say, unhinged. Sure, he’s the Dark Knight. Yes, he’s a crime-fighter. But he’s not a “hero.” He’s surly, unpredictable, uncooperative and just a tad bit…cracked. He refers to himself as “the goddamn Batman,” which made me think of the awesome Twitter feed of the same name every time I read it. I’m assuming this comic is also from where the idea for Christian Bale’s gravelly, growly Batman voice came? Interesting. Works better in print form.

Final Verdict: I’m not really sure I want to add this to my library. As much as I love Lee’s artwork as well as many aspects of Miller’s re-imagining of Gotham and its Dark Knight, I didn’t feel any particular desire to revisit. This might change. If it does, I’ll let you know.